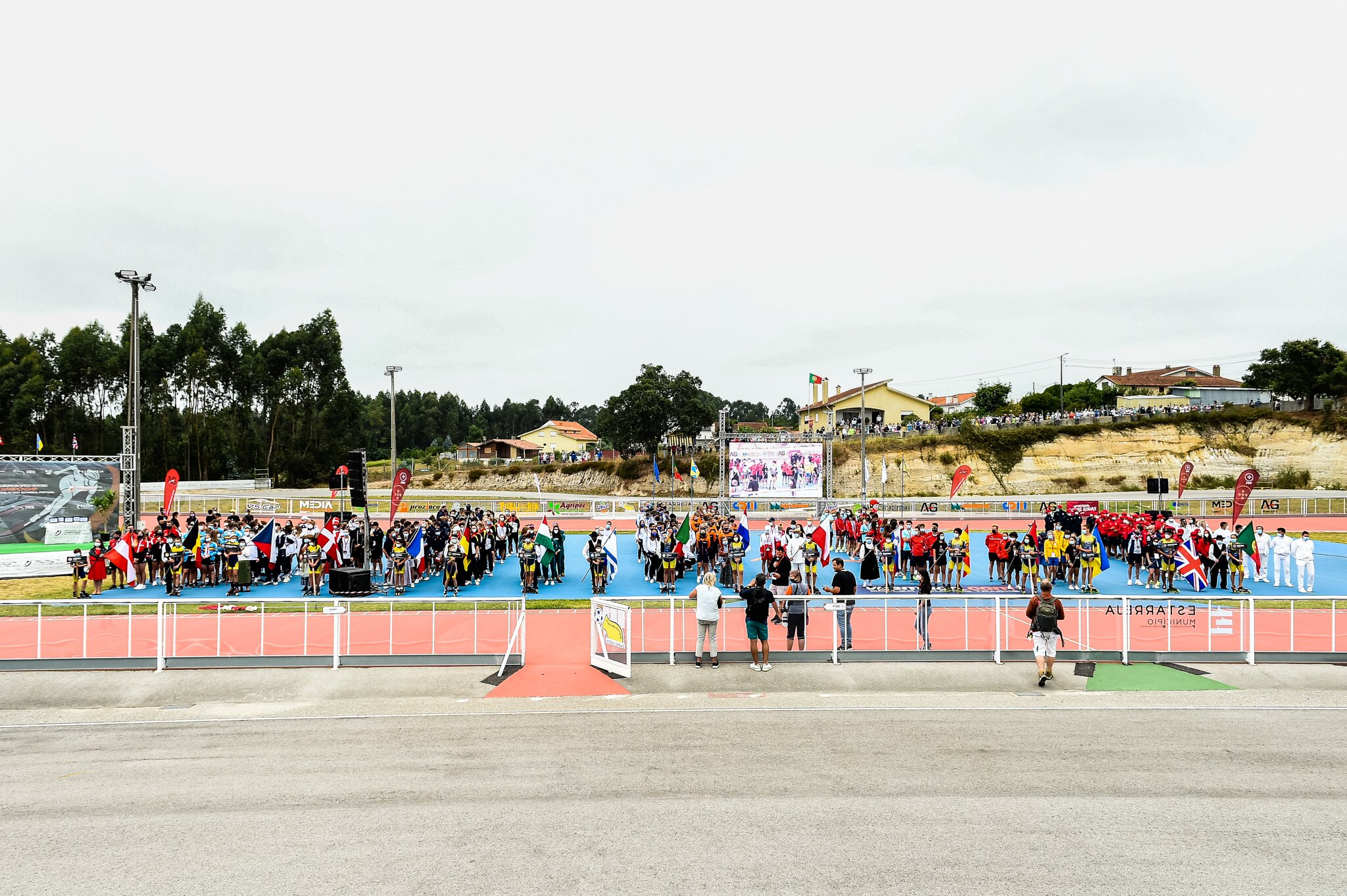 The European Speed Skating Championship Canelas 2021 started officially today, with its opening ceremony, and the presence of the national teams from 17 countries, representing over 270 skaters.

The show started with a presentation film about Estarreja, with the theme «Estarreja Vila-Cidade», sung live by Nuno Bastos, followed by an act by the Bingre Canelense band. A surprise was prepared with the appearance of a parachutist, descending with the flag of Arsenal de Canelas, FPP and WSE.

Next, to time to watch a representation of the Estarreja Carnival, with a parade from several Samba schools (ACRES «Vai Quem Quer», GRES «Trepa de Estarreja», «os Morenos» and «Samba Tribal»). Continuing a high note, everybody watched the national flag being hoisted while listening to the Portuguese national anthem, followed by an act from the SED Dance School Exhibition.

Before the welcome speeches by the official entities, all 17 national teams made their entrance and presentation, each one paraded accompanied by an element from the folklore dance group «As Tricaninhas de S. Miguel de Fermelã» (carrying the country’s flag) and a young skater carrying a plaque with the country’s name.

«Welcome to Canelas everybody. It is an honor to have you here in our homeland» were the first words from the mayor of Estarreja, Diamantino Sabina, who made a point of thanking everyone «for how hard have been committed in these last days» to make this event possible, which «despite the contingencies, will certainly prove that Canelas is capable of organizing an international competition».

For the FPP president, Luís Sénica, «we all are already winners because, in the midst of a pandemic, we had the courage, the capacity and the determination to organize this European Championship», emphasizing that Sport «is life, is courage and is resilience». Luís Sénica also thanked the official entities and everyone who will participate and wished this «to be a great event».

Fernando Claro, president of the WSE, highlighted the «healthy partnership» between the official entities and the Clube Arsenal de Canelas, which «in its day-to-day manage to do its best to attract more youth to practice this sport, but also works at a national level and with some athletes that represent our country in international events», emphasizing that «Canelas will be, for a week, the capital of Speed Skating in Europe». The last word was given to the chairman of the European Committee for Speed Skating, Irmelin Brigitta, who officially declared the European Speed Skating Championship Canelas 2021 open.